What is Kaluga Caviar 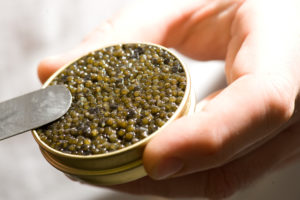 The decadent flavor of Kaluga Caviar has made it one of the world’s most sought after gourmet foods. In fact, it so closely captures the unique essence of the Beluga Caviar that it represents a fierce competitor to this rare variety that is restricted to sell in the US. Often referred to as “River Beluga” the hybrid Kaluga Caviar is the sustainable answer to the endangered Beluga or European sturgeon population.  As such, consumption of Kaluga Caviar replicates, and for some, may even exceed the exquisite culinary experience of the illegal Beluga Caviar.

On average, the Kaluga (Huso dauricus) is considered to be the world’s largest freshwater sturgeon.  It is a predatory fish native to the Amur River basin.  The Kaluga sturgeons are capable of growing to sizes of over 18 feet and weight of at least 2,205 lbs. They feed on salmon and other fish while in the river basin. And, much like the Beluga sturgeon, part of their life is spent in salt water.  An adult female Kaluga can produce up to 44 pounds of caviar.  Unfortunately, spikes in river pollution, especially near spawning grounds in the Amur River and heavy poaching for their valuable roe has brought the remaining population of wild Kaluga sturgeons to near extinction.  Today, outside of the farm-raised population (which actually produce some of the best Kaluga caviar), adult Kaluga can only be found in the wild in the Argun River. Some younger Kaluga sturgeons also live in the Sea of Okhotsk and the Hakkaido Japanese Island.

In appearance, the medium to large Kaluga eggs have a glossy light to deep brown or golden hue.  The texture of the Kaluga roe is firm and smooth with an earthy, buttery flavor and a mildly salty overtone. Preparation of Kaluga Caviar encompasses a light salting procedure that produces a tantalizing residual flavor. Fresh Kaluga should be stored in the Frigidaire for 1 to 3 month.  However, after it is opened, keep leftovers should be kept in the coldest part of the refrigerator. Remember, the delicate quality of fine varieties like the Kaluga Caviar selection makes it extremely perishable once it has been opened.  As such, caviar experts suggest you buy the best Kaluga caviar in the amounts that you will consume soon after you purchase.

Coupled with the sheer pleasure of savoring a dollop of Kaluga Caviar are a number nutritional benefits.  While most caviar consumers are more preoccupied with tantalizing their taste buds than nurturing their bodies, the alimentary factors of caviar should not be overlooked.  For instance, for every 15 grams or one tablespoon of caviar there is approximately 30 mg of potassium, 1085 mg of Omega-3, 37 IU of Vitamin D, 3.5 mcg of Vitamin B12 as well as varying concentrations of calcium, phosphorus, selenium, iron and magnesium among others.  Based on these factors, it is not surprising that this ancient fare has endured through the ages and is considered still to be a wonder food.  In fact, data shows that high consumption of caviar, in some instances, can even alleviate some depression and bipolar disorders.

Where to Buy The Best Kaluga Caviar

There are many varieties of caviar available today ranging in both quality and price. The best Kaluga caviar are that which have excellence in growing conditions, harvesting and preparation.  The highest quality Kaluga Caviar can be purchased online, on high-quality online stores such as caviarlover.com or found on the menu at fine restaurants.  So, for the greatest benefits and flavor experience, buy the best Kaluga Caviar available. At Caviar Lover you have the option to buy caviar online from a wide selection of domestic and imported Caviar, including Kaluga Caviar and varieties.