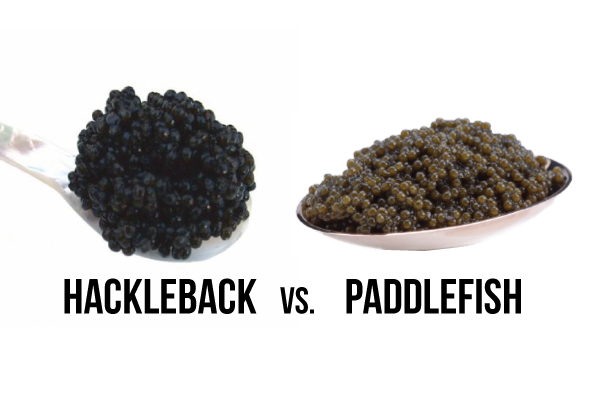 What are the hackleback paddlefish differences? While our Hackleback and Paddlefish caviar are both sourced domestically, usually from the region surrounding the Mississippi River, they have some noticeable differences that set them apart.

American Paddlefish is actually considered a fish roe, not a caviar, since it does not originate from a Sturgeon species of fish.

With that said, the color of Paddlefish caviar ranges from soft to steel gray, sometimes with golden brown tones – unlike Hackleback caviar, which has a strong black color.

As for taste, Paddlefish roe is often regarded as having a “rich and complex” flavor expected of Caspian Sea caviar.

Hackleback, on the other hand, has a sweet, nutty flavor, which some describe as “intense.”

While Paddlefish roe and Hackleback caviar have noticeable differences in color and flavor, each contains about the same amount of salt, and are slightly more salty than imported caviar because they are from the wild.